Our Junior Library Assistants, Miss Faith and Miss Mallory, are heading back to school next week; Elementary and Jr. High, respectively.

As one of her final projects Miss Faith put together a back to school display complete with our Fisher-Price Little People school bus.

You will notice the STOP sign is out.  Whatever your mode of transportation; car, truck, bike or horseback, please be alert and ever so careful when you come upon a stopped bus!  Obey the law and more importantly, do your part to keep all of our children safe.

So, Miss Samantha, Miss Faith, Miss Mallory and Miss Marta have all fled the nest at 19 Kingsbury Avenue.

Have no fear; Miss Marge and myself will do our very best to carry on without them. 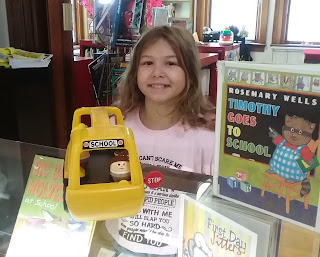 Posted by Margaret Reaney Memorial Library at 1:39 PM No comments:

When Marta was first hired, I asked her to address a genealogy query we had received.  Genealogy has never been, nor will it ever be, my strong suit.  Marta took that query and ran with it.  From that moment, any genealogy or local history question that came our way was directed towards her desk.  She has communicated with and assisted people from throughout the U S, Canada and Europe; helping to unravel sometimes very complicated family “webs”.

I remember a couple of cases in particular.  One question involved an ancestor who had been married five times.  No one could seem to determine where the woman had actually been buried.  While Marta has a strong suspicion, even she has not been able to fully prove it.  That inquiry first arrived on her desk probably twenty years ago.  Since that moment, in all of her subsequent research for other families, she has kept one eye open hoping to find the definitive answer.

Another case involved a gentleman who was doing a bit more current research.  He laid out his case addressing the matter of an Aunt.  Using our various resources, the story Marta pieced together was a bit different.  It would seem his Aunt was actually his mother.  When Marta asked me what she should do, I simply said “Mail him what you have, and let him make the ultimate determination”.

The library has a scrap book collection of probably close to forty volumes.  Over the last few years, Marta has painstakingly indexed each one.  Hours have been spent maintaining the scrap books and indexing them.

The times have been rare that she has not been able to provide accurate and knowledgeable answers to a local history question.  What I know pales in comparison to the vast knowledge she has accumulated and retained over the years.   That kind of expertise is something few can claim.

Years ago when our library system began automating it was Marta who barcoded and cataloged the collection.  Some of those same skills were later put to use when our paper inventory of museum records were digitized.

She has been my sounding board during the worst times of my life both professionally and personally.  Over the years I have ranted and raved at some boondoggle and always she has listened patiently and offered some words of wisdom.

One of the best pieces of advice she gave me happened when I was a new mother.  One night my new born was screaming her lungs out and I was just beside myself with worry and frustration.  I called Marta and she came right up to help.  When I had been discharged from the hospital the nurses stressed to me how important, as a nursing mother, it was to stay hydrated.  Over the course of that particular day I had consumed a quart of grape juice.  Marta arrived, took my squalling child, noticed how my offspring was drawing her tiny legs up with each howl,  asked me what I had to drink that day and confidently proclaimed my kiddo had a bellyache.  I walked the floor with her and eventually the tummy problem passed, in more way then one, and I didn’t make that mistake again.  I would also add that my daughter was NEVER fond of grape juice as she grew older.

In all of the years that we have worked together I can honestly say that I remember only two occasions where we vigorously disagreed.  We each retreated to our corners and after a couple of days, all was well.  I think that kind of successful working relationship is rare and I am so glad that was the norm between Marta and myself.

Her selfless nature and devotion to the library was most recently demonstrated earlier this year when I was out of work following a stroke.  At the request of board president, Sharon Fuller, Marta willingly came out of semi-retirement to keep 19 Kingsbury afloat until I could return to work.

Always humble, Marta would never think to describe herself this way, so I will.  Marta Zimmerman is a remarkable, capable woman with an incredible work ethic, strong moral compass and deeply compassionate heart.

I am richly blessed that our paths crossed almost forty years ago.  Because of that, I know I am a better person and that the library has been well served by her, above and beyond “just doing my job”.

While the winds of change blow through the doors at 19 Kingsbury Avenue, the impact Marta Zimmerman leaves will be a lasting one.

Please join me in thanking my friend and colleague for her dedication and wishing her a happy and healthy retirement.  Not only has she earned it, more importantly, she deserves it.

Posted by Margaret Reaney Memorial Library at 9:54 AM 1 comment:

Fall Story Time will get underway Wednesday, September 18 @ 10 AM.  This is a free, weekly program open to preschoolers, infant to age 5.   Children must be accompanied by an adult caregiver.

Registration is not required.

Anyone desiring further information is invited to contact Library Director Dawn Lamphere at 518-568-7822. 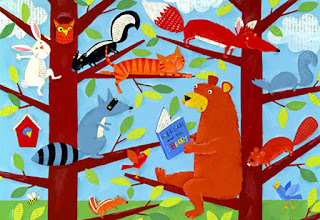 Posted by Margaret Reaney Memorial Library at 1:50 PM No comments: